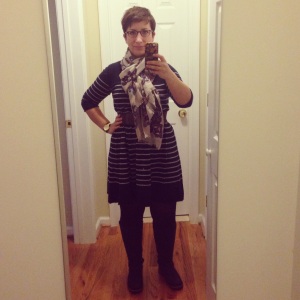 Thankfully, I’ve learned that oversleeping doesn’t have to keep you from looking like you know what you’re doing. I threw on a comfy sweater dress with a pair of textured tights, added a belt and boots, and topped the whole thing off with my new favorite scarf. The navy in the dress picks up the navy in the scarf, and the ivory base color in the scarf picks up the ivory stripes in the dress. The burgundy accents in the scarf make for a nice extra tone.

Massive props, by the way, to Autumn Cashmere for making a-line sweater dresses. As a curvy lady, I constantly envy my slender friends their cozy winter staples, but the typical sweater dress tends toward the straight-up-and-down shapes. Given that my shoulders are 1-2 sizes smaller than my hips, that doesn’t work for me. Autumn Cashmere’s dresses work perfectly for me, though I do have to make a point of belting them to ensure some shape to my, um, shape. They’re way outside of my nonprofit salary range, but can frequently be found on Bluefly for less than retail.

Also, shout out to Duo Boots, a British company that makes boots to order. Give ’em your foot size and your calf measurement, and they’ll send you a high quality leather boot built specifically for you. Also pricey, but given that I wear boots, um, daily during the wintertime, the price-per-wear gets very reasonable very fast.

On top of being work-appropriate, this outfit is straight up comfy. As a friend said of such outfits, “I look stylish but feel like I’m in my pajamas.” Took me approximately twenty seconds to get dressed, but the belt and boots make the whole thing look intentional. Bam. Tuesday.